OAP Olisa Adibua Calls Out Davido & Ice Prince during a session with MTV Base. 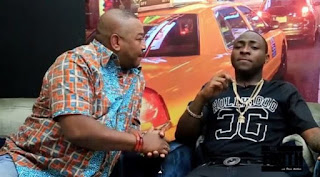 
During a session with MTV Base West, Olisa described the act as bring “excess luggage” on stage. The OAP said had no choice but to call out Davido and Ice Prince, according to music site, Jaguda.

He also revealed he has had to ask so many of them to step back from the stage as they were not rapper or backup singers.