Home News/Gist Prince William Threatens legal action against media house that wrote news of him ‘cheating’ on Kate when she was pregnant.

Prince William Threatens legal action against media house that wrote news of him ‘cheating’ on Kate when she was pregnant. 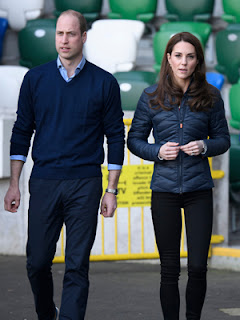 Prince William, 36, is working hard with help from his lawyers to squash a rumor that claims he cheated on his 37-year-old wife, Kate Middleton, when she was pregnant with their third child, Louis.

The rumor has actually been circulating for nearly a year now, but In Touch Weekly ran a front-page story about the accusation in its latest edition, so Prince William’s lawyers decided that now was the best time to take action, as this is the first mainstream publication to run the story, according to Hollywoodlife.

“In addition to being false and highly damaging, the publication of false speculation in respect of our client’s private life also constitutes a breach of his privacy pursuant to Article 8 of the European Convention to Human Rights,” attorneys with London law firm Harbottle and Lewis, which has represented the royal family before, said in a letter that was sent to at least one British publication after the release of In Touch Weekly‘s cover story, according to the Daily Beast.
In Touch Weekly‘s story claims that Prince William cheated on Kate with their aristocratic neighbor, the Marchioness of Cholmondeley, Rose Hanbury. An unnamed source told the news outlet that Kate “immediately confronted” William upon learning about the alleged affair, but he “laughed it off saying there was nothing to it.”
In Touch further claims that despite William’s denials, Kate told William to stop socializing with the Cholmondeleys. “Kate sees their friendship in an entirely different light now,” the source said, adding that she’s since lost trust in William. “They come across as a perfect couple who can do no wrong,” the “insider” also told In Touch. “But the reality is, most couples have their issues and William and Kate are no different. [The scandal] has rocked the palace and their marriage.”

Harbottle and Lewis has stated that there’s nothing true about this story, and the law firm is now threatening legal action against UK media outlets if they regurgitate the story about the long-standing rumor.