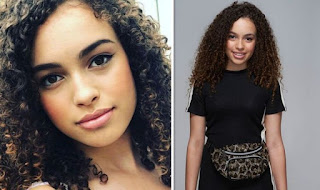 British child star Mya-Lecia Naylor who got her start on Absolutely Fabulous, has died at age 16. The actress was best known for appearing on two teen-oriented shows on the BBC network: Millie Inbetween and Almost Never. In a statement on Wednesday, the network confirmed her death.


“We are so sorry to have to tell you that Mya-Lecia, who you will know from ‘Millie Inbetween’ and ‘Almost Never’ has, very sadly, died,” the network said in a statement. “Mya-Lecia was a much loved part of the BBC Children’s family, and a hugely talented actress, singer and dancer. We will miss her enormously and we are sure that you will want to join us in sending all our love to her family and friends.”

“We know this news is very upsetting, and it may help to share how you are feeling with friends or a trusted adult,” the statement continued.

Naylor, an aspiring model and singer, began acting as a toddler, when she appeared on Absolutely Fabulous. From there, she appeared in TV movies and miniseries before scoring her biggest role on the CBBC show Millie Inbetween. After four years on the show, she landed a role on CBBC comedy/drama Almost Never, writes People.

On its official Instagram page, Almost Never issued its condolences- “Our thoughts are with Mya-Lecia’s family, friends and everyone that loved her at this very sad time,” the show wrote. “RIP Mya-Lecia.”

Her costar, Emily Atack, also spoke out on Instagram, writing, “She was a beautiful and talented girl.” “A complete joy to be around on the set of Almost Never,” Atack continued about Naylor. “Sending all my love to her family & friends. Rest in peace beautiful girl.”