‘THE CURSE OF LA LLORONA’ in Cinemas this April- See trailer here! 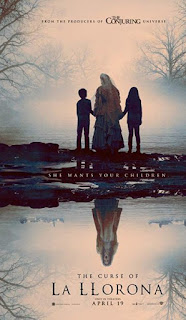 ‘THE CURSE OF LA LLORONA’ is a 2019 American supernatural horror film directed by Michael Chaves (in his directorial debut) and written by Mikki Daughtry and Tobias Iaconis.


In 1970s Los Angeles, the legendary ghost La Llorona is stalking the night, and the children. Ignoring the eerie warning of a troubled mother, a social worker and her own kids are drawn into a frightening supernatural realm.

Their only hope of surviving La Llorona's deadly wrath is a disillusioned priest who practices mysticism to keep evil at bay.