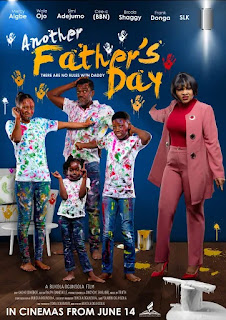 The official teaser and poster for Another Father’s Day has been released at an official media brunch which took place at the Raddison Blu Hotel GRA, Ikeja.


Another Father’s Day is an independent sequel to the movie Happy Father’s Day. It’s a family comedy which seeks to sensitize parents on the need to balance their work life with family.

Produced by Revelation Pictures and distributed by Silverbird Distribution, “Another Father’s Day’’ is set for release on the 14th of June, 2019.
Trailer- https://youtu.be/9KBWqTe-C9A