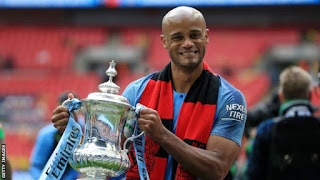 
Saturday's 6-0 FA Cup final win over Watford was Kompany's final game for City as the 33-year-old has signed a three-year deal with the Belgian club, Anderlechtafter 11 years at Etihad Stadium.

In an open letter on Facebook, Belgium defender Kompany said leaving City
"Doesn’t feel real…Countless of times have I imagined this day," he said. "After all, the end has felt nearby for so many years.
"Man City has given me everything. I've tried to give back as much as I possibly could."
He went further to add; "I want to share my knowledge with the next purple generations".
"With that, I will also put a bit of Manchester in the heart of Belgium."