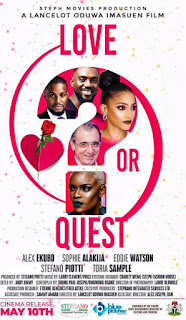 Mabel (Toria Sample) who works at a fashion house, had a sick brother and was looking for possible ways to cater for her poor family.


She had a boyfriend by name Tony (Eddie Watson) who although was learned, happened to be a struggling automobile engineer. Mabel who had a flare for fashion got into a modeling contest, where she met a friend from their young days called Cynthia (Sophie Alakija) they got well into the training.

But Mabel sprained her ankle when they were trying to rehearse and used native medication which made the sprain infected, and had to go to the hospital where she met a doctor called Andrew (“Alexx Ekubo”) who helped Mabel and later fell in love with her.

Movie will be in Cinemas from May 10th.