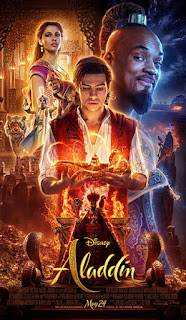 Aladdin is an upcoming American musical fantasy film which is in turn based on the eponymous Arabic folktale from One Thousand and One Nights.


It is a live action remake of Disney's 1992 animated film of the same name- A kindhearted street urchin and a power-hungry Grand Vizier vie for a magic lamp that has the power to make their deepest wishes come true.

The movie was directed by Guy Ritchie, screenplay co-written with John August, and produced by Walt Disney Pictures.

Trailer- https://youtu.be/JcMtWwiyzpU
Movie in cinemas from May 24th.