Home News/Gist An angry Herbalist storms pastor's church to collect back his charm.

An angry Herbalist storms pastor's church to collect back his charm. 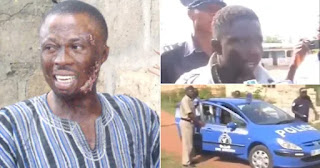 A popular Ghanaian herbalist named Kwaku Bonsam stormed a pastor's church to collect his charms. The juju man who had engaged in dubious acts with the man of God entered his church angrily and caused mayhem because the pastor had reportedly
made jest of his powers. Kwaku's encounter with the minister in question came as a shock to many.

A video of the juju man confronting the pastor publicly and demanding for his charm within the premises of the church was shared on Facebook by a platform identified as Evangelist Chief TV. In the video, the angry Kwaku stormed the church with his crews and began to walk from room to room looking for his charm.

As he walked about, several people came to intercede on the pastor's behalf. Kwaku who was not in any mood to hear their pleas ranted about what had triggered his action to publicly come to the church. According to him, the pastor had mocked his powers and ridiculed the gods he worshipped by claiming that the charm given to him did not draw people to his assembly as expected, writes Legit.

The herbalist went on to boast about his powers. He claimed that over 1,600 pastors from all over the world patronise him. Also, he said that it is by means of his powers that most Ghanaians men of God were able to perform miracles. A large crowd gathered outside the premises of the church to watch the spectacle. Following this, the police came to intervene and this is when the pastor confessed to the dealings he had with the juju man.

According to the pastor, he and Kwaku duped several people of their money through a dubious scheme. After enjoying the loot from their fraudulent act, the herbalist gave him a charm with which to plant and grow a church in Kumasi. To back up his words, this man of God showed off the stony 'god' he was given.