Home News/Gist Huddersfield outgoing Chairman, Dean Hoyle and his wife Janet went on to the field to applaud the club fans as they head into relegation.

Huddersfield outgoing Chairman, Dean Hoyle and his wife Janet went on to the field to applaud the club fans as they head into relegation. 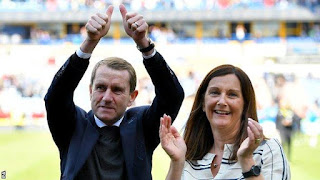 It was a poignant afternoon for Huddersfield - their final home Premier League game for now, and the last time Hoyle sat in the directors' box as chairman.


Hoyle, 52, is a local businessman and a lifelong fan who took over the club in 2009 and oversaw their rise from League One as they reached the top flight for the first time since 1972.
After recovering from a serious pancreatic condition, Hoyle has sold 75% of his stake in Huddersfield in completing a deal with another long-standing supporter, Phil Hodgkinson.
Speaking at a fans' function before the game, Hoyle said he had rejected larger offers from potential overseas investors - people he spoke to while he was in hospital - to 'keep the club local'.
Huddersfield fans sang Hoyle's name after the game began and his on-pitch address at half-time, while barely audible to most supporters, was greeted with warm, enthusiastic and loud applause.
Hoyle even got something to celebrate as Mbenza scored his first goal in 23 Huddersfield appearances, writes BBC football.