Joe Jonas & Sophie Turner held their wedding in Vegas- a huge surprise to many! 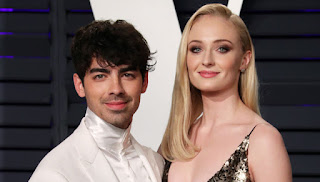 Joe Jonas, 29, and Sophie Turner, 23, had a Vegas-themed wedding on May 1, a bigger plot twist than whatever the Game of Thrones finale has prepared.

They applied for a marriage license earlier that day in Clark County, Nevada, according to online records. The couple tied the knot in Las Vegas’ A Little White Wedding Chapel as a large crowd watched from the pews. Diplo filmed their exchange of vows on his Instagram Story, as you can see below.

The nuptials, including the pre-wedding party at Carbone restaurant, happened not even a full two hours after the 2019 Billboard Music Awards at the Grand Garden Arena, where the Jonas Brothers performed. Joe’s brothers Nick, 26, and Kevin, 31, also made the trip from the BBMAs to the chapel, as they were on hand as groomsmen. 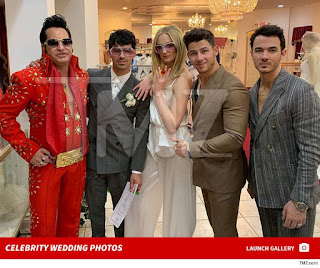 This was as classic as Vegas weddings get, a complete 180 from the summer wedding in Europe that Sophie and Joe had originally planned. Their officiant was an Elvis impersonator, who broke out into a cover of “Viva Las Vegas” after Joe and Sophie made their lifelong commitments to one another by exchanging ring pops. HollywoodLife has reached out to Joe and Sophie’s reps for comment.

Diplo and the JoBros weren’t the only celebrity guests. Dan + Shay sang “Speechless” as Sophie, who stunned in a white satin co-ord and veil, made her way down the aisle. Khalid also made it to the big night, reports Hollywoodlife. 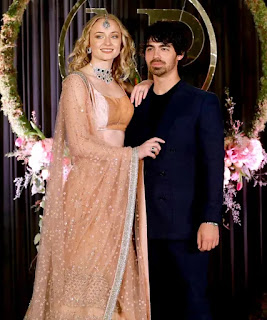 Of course, Diplo lent his DJ skills to the festivities, as he was not just there to break the shocking news. The EDM producer was exceptionally nonchalant for such a milestone, as he first filmed Joe and Sophie heading inside the chapel with the caption, “Gonna hit this wedding real quick.” It’s not the first time the chapel has seen celebrities on its altar, as Britney Spears, and exes Bruce Willis and Demi Moore, all tied the knot in the same quaint venue.


Sophie announced that Joe proposed to her in Oct. 2017, and we’ve been waiting a year and a half for this big moment. It happened much sooner than anticipated! Joe announced he and Sophie would get married in the summer of 2019 on the March 4 episode of The Late Late Show.
Joe said that the wedding would be hosted in France in a recent interview on the Zach Sang Show. With Joe and Sophie rocking candy rings in Sin City now, it’s unclear if they’re proceeding with the ceremony acros