Home News/Gist Kylian Mbappe gets 3 match ban as Neymar will be further disciplined.

Kylian Mbappe gets 3 match ban as Neymar will be further disciplined. 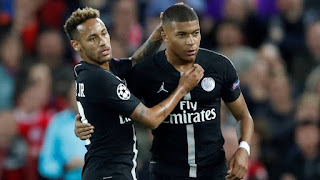 Paris St-Germain striker Kylian Mbappe has been banned for three games after being sent off in the French Cup final, while disciplinary proceedings have been opened against team-mate Neymar.


France international Mbappe was sent-off for a bad foul in extra time of the 2-2 draw, with Rennes winning 6-5 on penalties.
Neymar appeared to lash out at a fan as he walked up to collect his medal. PSG have four league games remaining, but have already won the Ligue 1 title.
The Rennes defeat ended PSG's four-year reign in the French Cup and means that, while they have retained the French league title, they have won none of the cup competitions they entered this season, having lost to Manchester United in the last-16 stage of the Champions League, according to BBC football. 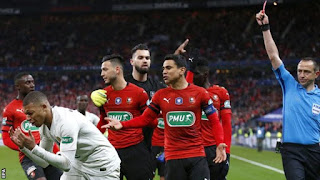 Ligue 1 top-scorer Mbappe has already missed one game, Tuesday's 3-2 loss to Montpellier, and will now miss games against Nice and Angers, before returning for the final two matches of the season.
Last week, he was given a three-match European ban by Uefa for a tirade at officials following PSG's 3-1 home loss to United in the second leg of their last-16 tie - a game that he missed through injury.