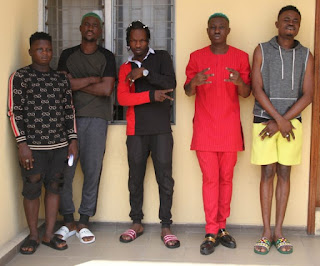 Nigeria’s anti corruption agency, ‘The Economic and Financial Crimes Commission (EFCC)’ has promised Nigerians that arrested Nigerian artistes would face the legal action in court as soon as possible.


The musicians, Afeez Fashola aka Naira Marley, Omoniyi Femidayo Raphael AKA Zlatan Ibile were arrested by the anti-graft agency ON Friday, May 1oth, 2019. The music stars were taken into the commission’s custody alongside their accomplice.

According to an insider report from the EFCC, the commission plans to charge the suspects to court based on the information volunteered by them. The anti-graft body has also reiterated that the suspects will remain in custody until they have been arraigned in court, reports Jaguda.