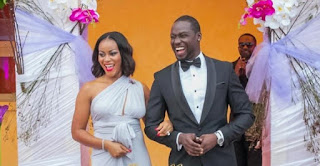 Aftermath of the murder of actor Chris Attoh’s wife, Bettie Jenifer shot dead while leaving her office on Friday, May 10th, 2019: Investigations by the Greeneblt Police Depart has revealed that she was married to two men, one of whom is a notorious drug lord, Kedrick.


Kedrick ran a drug trafficking organization that distributed cocaine in Baltimore and Woodbridge, Virginia. But he is currently serving a 20-year prison sentence for importing large amounts of cocaine into Baltimore from Texas.
Police report reveals that though Kedrick filed for a divorce on April 9th this year, while Bettie Jenifer then filed for divorce six days later, that they are still legally married.