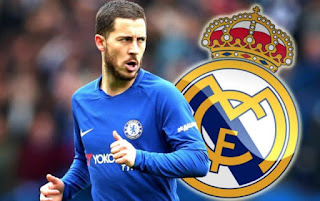 Eden Hazard's £86m move to Real Madrid will be announced after the Europa League final on May 29.


The Chelsea winger has been heavily linked with a move to the Spanish capital and this week confirmed that he had informed the Blues of a decision on his future, reports Skysports.
A deal for Manchester United midfielder Paul Pogba, however, is far from complete, with the Frenchman's wage demands straining negotiations. The 26-year-old is asking for £13.8m a year which, Los Blancos believe, is excessive. Zinedine Zidane remains keen on landing Pogba, though, so talks are expected to continue