Shatta Wale quits music after StoneBowy pulled a gun on him during Ghana music Awards- Catch everything here! 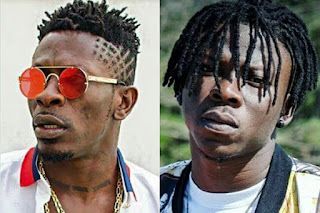 A fight erupted between Ghana’s two music heavyweights, Stonebwoy and Shatta Wale during the 20th anniversary of the Vodafone Ghana Music Awards, shortly after Stonebwoy was announced the winner of ‘Reggae/Dancehall Artiste of the Year’.


Then when Stonebwoy was about to deliver his acceptance speech for his award, Shatta Wale and his obviously bitter entourage started walking to him on stage, as they stormed the stage when they had not been invited, then they began exchanging blows between Stonebwoy’s entourage, but Stonebwoy was battle ready as he pulled a gun on him, but the security quickly intervened.

The chaos led to other stars in the hall to run for their dear life.
Shortly after the incident, Shatta Wale posted on his Facebook wall he was quitting music to face his real estate business. See his post below…

“I have better things to do now than to record a song... Shatta Wale is on different level of life ...Music was just a hobby I chose ...The story will be, they couldn’t STAND HIM NOR STOP HIM till he got into his REAL ESTATE BUSINESS!!!! 😂😂😂😂😂 I HAVE ENOUGH MONEY IN THIS BIZNESS THEY CALL MUSIC!!!
THE REIGN WAS GODL!!!!
Big up every SM fan ...you tried!!! We tried!!!”

Watch the video of the award fight- https://youtu.be/i5vZahHfonA