Former United goalkeeper Andres Lingaard has bared his mind on the post Sir Alex Ferguson‘s era at the old Trafford. He is not particularly happy that Ferguson was replaced by David Moyes upon his retirement.


According to him, appointing Moyes after the exit of Ferguson was like charging an iPhone with a Nokia charger. See the interview excerpt below:

David Moyes claimed he inherited an ageing squad and Louis van Gaal then made sweeping changes. Was that fair?

“I didn’t feel it ageing. It felt more like we just couldn’t adjust to a new way of life.
It seemed like trying to charge an iPhone with a Nokia charger. It just slowly went flat. Who was ever going to lift the club after the boss? 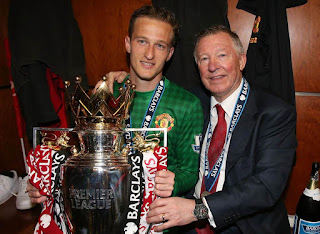 Moyes and everyone with big influence on United have all been easy targets. And I refuse to be another one pointing at individuals.

Every time the team has had a single bad result I’ve heard suggestions for new managers, getting rid of half the team and signing new players. I imagine it isn’t easy to work under those circumstances.

I’ll point at myself and everyone else involved with United. Both on a professional and an emotional level. We were all to blame.

None of us could accept changes to our beloved United. All of us thought everything should just stay the same and we’d carry on succeeding.
It was an illusion.”