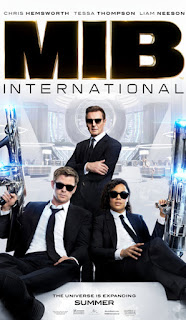 Men in Black: International- In September 2017, it was reported that the studio is fast-tracking a spin-off film with younger actors, and a plot handling the invasion of aliens on a global scale.


Chris Hemsworth and Tessa Thompson star as Agent H and Agent M, who employ high-tech weaponry to battle mischievous aliens on Earth. However, the pair also discovers a major threat within their own ranks.