Movie alert: ‘Everything Happens to me’ in cinemas soon- See trailer here! 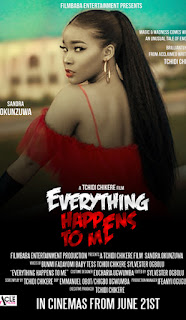 
About the film: Eighteen year old Imelda finds out she is pregnant out of wedlock for Ikoku her first love. Fearing the consequences and the anger of her strict religious and widower father, who is a knight in Church, Imelda opts for an abortion.

But the pains of a D and C were too much for her to bear so she flees from the gynecologist halfway through the procedure. She gets home bleeding and in pains.

Then she begins to hear the voice of her dying baby, at first she thinks it is a figment of her imagination and sweeps it aside, but she is home alone as usual, her father having travelled out of the country, so it doesn’t take time for Imelda to realize there is someone else in the house, a loving and violent being all rolled into one sad being.