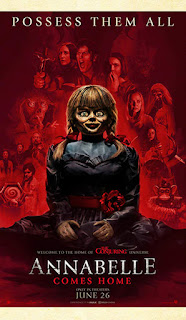 Annabelle Comes Home is an upcoming American supernatural horror film based on the legend of the Annabelle doll. It serves as a sequel to 2014's Annabelle and 2017's Annabelle: Creation, and as the seventh installment in the Conjuring Universe franchise.


Determined to keep Annabelle from wreaking more havoc, paranormal investigators Ed and Lorraine Warren lock the possessed doll in the artifacts room in their house. But when the doll awakens the room's evil spirits, it soon becomes an unholy night of terror for the couple's 10-year-old daughter, her friends and their young baby sitter.

The film is written and directed by Gary Dauberman in his directorial debut, from a story co-written with James Wan. Wan also produced the film with Peter Safran.

Movie in cinemas from June 28th.