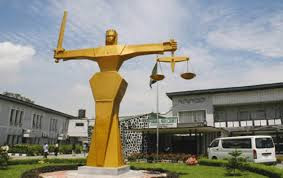 A 28-year-old Nigerian lady simply identified as Suliat has asked her husband, Lateef, to return her virginity and health if he wants their 2-years old marriage to be dissolved.


Lateef had approached an Iseyin Grade C Customary court to seek the dissolution of their marriage on grounds that she constantly brought him shame and embarrassment. He alleged that Suliat was always in the habit of picking a fight with him in public, writes LIB.
However at the hearing of the divorce case today June 19th, Suliat told the court that she would agree to the dissolution of their marriage only if Lateef returns her virginity and good health, as it was two years ago before the union.
Suliat accused Lateef of using charm on her to get married to him. According to her, while she was still a single lady, she went to Lateef for spiritual help for her business. Lateef promised to help her and asked her to bring him some of her pubic her as well as have sex with him. According to Suliat, she gave in to his request and that was how she found herself married to Lateef.
Suliat told the court that she experienced financial increase in her business after she got married to Lateef but that her health began to deteriorate later on. She demanded for her health and virginity to be restored before Lateef can leave her.
The court adjourned the case to enable Suliat seek medical attention.