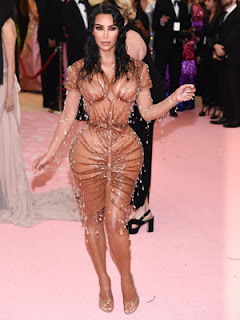 Kim Kardashian‘s waist has baffled fans ever since she showed up to the 2019 Met Gala in May in a corseted Thierry Mugler dress that made her frame look impossibly small. Rumors immediately circulated claiming she removed some of her ribs, but she recently laughed off the idea and credited a vegan diet for her slender appearance.


In an Instagram Story clip, she was jokingly interrogated by her friend Anastasia Soare, founder of the cosmetics company Anastasia Beverly Hills, who said to Kim: “Please explain to me how it’s possible,” Anastasia asked, while aiming the camera at Kim, who was wearing a tight bronze dress that amplified her famous curves, according to Hollywoodlife.
“Oh come on,” Kim replied with a smirk. “This waist!” Anastasia exclaimed, adding that in all the years she’s known the reality star, she’d never seen her look this way.
She then jokingly asked the mother-of-four, “Did you remove your ribs?” But Kim had a different explanation for her body’s transformation: she simply went vegan. “I think that honestly being a vegan now helps,” she said, before examining her body. “It does look really small today.”
Kim previously shut down rumors she’d removed her ribs, telling WSJ Magazine, “I don’t even know if that’s possible.”

She told the magazine that the appearance of her waistline at the Met Ball was emphasized with a Mister Pearl corset that left her with marks all over her body. “I have never felt pain like that in my life,” Kim said, adding, “I’ll have to show you pictures of the aftermath when I took it off — the indentations on my back and my stomach.”