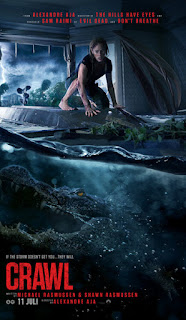 Crawl is a 2019 American disaster horror thriller film as a daughter and father who get trapped in their home during a Category 5 hurricane and are hunted by alligators.


When a massive hurricane hits her Florida town, young Haley ignores the evacuation orders to search for her missing father, Dave. After finding him gravely injured in their family home, the two of them become trapped by the rapidly encroaching floodwaters.
With the storm strengthening, Haley and Dave discover an even greater threat than the rising water level -- a relentless attack from a pack of gigantic alligators.
Directed by Alexandre Aja and written by Michael and Shawn Rasmussen.
Stars- Kaya Scodelario and Barry Pepper, Ross Anderson.
Trailer- https://youtu.be/H6MLJG0RdDE
Movie in cinemas from July 26.