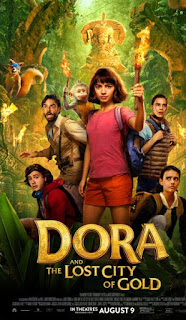 Dora and the Lost City of Gold is a 2019 American adventure comedy film. It is a live-action loose adaptation and continuation of Nickelodeon and Nick Jr.'s television series Dora the Explorer.


Having spent most of her life exploring the jungle, nothing could prepare Dora for her most dangerous adventure yet -- high school. Accompanied by a ragtag group of teens and Boots the monkey, Dora embarks on a quest to save her parents while trying to solve the seemingly impossible mystery behind a lost Incan civilization.