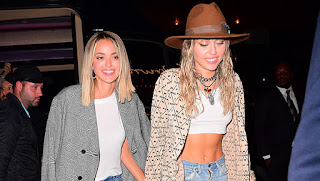 Miley and Kaitlynn appear to be taking things to the next level, only weeks after were first spotted kissing in Italy! According to a source close to Hollywoodlife.
“Miley and Kaitlynn are spending what seems like every moment with one another, so much so, that they’ve moved in together in the Hidden Hills area in the last week,” the source reveals.

The ladies have been inseparable since returning from Italy, hanging out all around Los Angeles and putting on major PDA at the Soho House on a recent date. 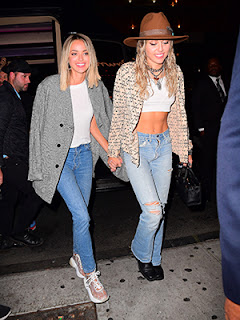 “You never spot one without the other at the home. The couple was seen moving into a home last week in the same gated community as the Kardashians, The Weekend and Drake who they now live very close to,” the source continued, alluding to the fact Miley and Kaitlynn are now residents of the pricey Los Angeles suburb of Hidden Hills.

Kaitlynn also accompanied Miley to the MTV VMAs in New York City on August 26, where Miley performed “Slide Away” her new song referencing her recent split from Liam Hemsworth, 29.

Interestingly, Miley and Kaitlynn were close friends before their surprising hook-up: Miley and Liam would often double date with Katlynn and her ex, Brody Jenner, 36.

“I have had a lot of conversations with Kaitlynn during the season, and her, Miley, Liam and Brody would always hang out together,” Kaitlynn’s Hills co-star Ashley Wahler revealed in an interview alluding to the fact she wasn’t surprised by Miley and Kaitlynn’s newfound romance. “So, I know they have all been friends for a long time.”

Miley and Kaitlynn have yet to confirm that they’re dating, but have consistently been spotted holding hands, out-and-about on dates and displaying PDA. Miley was, however, quick to debunk rumors about any infidelity in an Instagram post on August 22, writing, “Once Liam and I reconciled, I meant it and I was committed….I’m not perfect. I can admit to a lot of thing but I refuse to admit that my marriage ended because of cheating.”