Beautiful Nollywood actress and billionaire wife, Regina Daniels has reportedly thrown out her bestie, Cassie, from her house for allegedly attempting to seduce her Billionaire husband, Prince Ned Nwoko.


News has it that she has deleted all her photos from her Instagram page.
According to the story as published by SDK blog: Cassie is so in love with Regina’s hubby, Ned Nwoko and could not control herself around him.

One day someone caught her alone with Ned and it looked ‘somehow’ as she had a strange look and Ned allegedly had a wet look on his Jalabia.
Regina had been warned about Cassie but she did not listen and always maintained that she trusted her. According to the insider, even Ned had advised Regina severally to advise Cassie to dress appropriately but she always dressed like Regina around the house and wore very skimpy outfit. 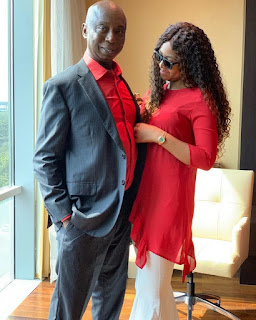 The person who met her with Ned alone raised the roof and insisted Cassie must leave the house. Insiders allege it was Regina’s mum who walked in on them but that info is not verified yet.
They are also allegations that Regina’s recent dramatic weight loss has to do with her being seriously sick recently from some kind of poisoning and the informant also insinuates that the young actress recently suffered a miscarriage.

I contacted Regina to find out if the allegations were true and she respectfully told me that her problems with anyone whether true or not should not be a topic for the Internet. I explained to her that my job as Journalist is to balance what is whispered with her own side of the story if she is willing to give it and she says.
There are many fake stories about me that I can’t explain all but from now on any fake stories about me will be handled. I asked her about all the rumour and she said: ”it’s about my life and i don’t want to talk about it”

"No, she never did that. The case is different. It has nothing to do with my husband or anything; she is not that kind of person. You know when there is a group of friends and one betrays the girl code, things are bound to happen. It was not just me that sent her away but friends and family that felt betrayed”
I asked if she was poisoned and she replied: ”I was never poisoned”
I asked more questions and tried to extract more info from her but Regina was done responding and she ”lock up” (Waffy slang).

I forgot to ask her if it was true that her mum had put a ban to all the married actresses who suddenly became her friend and visiting her in Abuja and staying in her house…I forgot to ask!!!