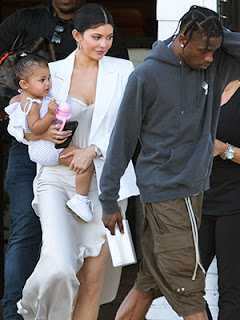 Kylie Jenner and her mom, Kris, revealed which traits Stormi Webster inherited from her parents while appearing on ‘The Ellen DeGeneres Show.’ Kris even has a hard time differentiating her daughter and granddaughter!


To Kylie Jenner, 22, her daughter Stormi Webster, 1, is the “perfect mixture” of the makeup mogul and boyfriend Travis Scott, 28. But to Kris Jenner, 63, her granddaughter and daughter are practically twins!
In the sneak peek clip for the September  9th  episode of The Ellen DeGeneres Show, Kylie and Kris chatted about Stormi’s likeness to her parents — each Jenner had a different take. “She is the perfect mixture of both of us. She’s definitely like a little rager. She loves music,” Kylie said of Stormi, whose father solidified his status as the concert hypeman throughout his carnival-inspired Astroworld – Wish You Were Here Tour, reports Hollywoodlife.

To prove Stormi and Travis’ shared passion for raging, Kylie and Kris revealed Stormi was “dancing in the dressing room” because of all the audience members dancing at Ellen’s show! We know, we know — too cute. But Kylie cut in to make an interesting point. “You tell me Stormi reminds you a lot of me,” the Kylie Cosmetics CEO told Kris, who was happy to elaborate.
“She is like a little Kylie. It’s really wild. It’s like sometimes she looks at you and you think, ‘I have to remind myself that’s my granddaughter, not Kylie…You know for two seconds, like it catches you off-guard,” Kris admitted. It’s okay Kris, we don’t blame you. Kylie and Stormi redefined “twinning” when they wore matching blue dresses from TLZ L’Femme for a fun day of boating along the Mediterranean coast in Italy on Aug. 12.