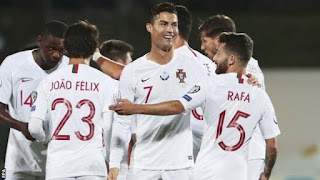 
This was his eighth international hat-trick, and has now scored 93 international goals, 16 behind Iran legend Ali Daei's world record.
After his early penalty in the game which was equalized in the first half by Vytautas Andriuskevicius, before Ronaldo's 20-yard shot went in off the head of Lithuania goalkeeper Ernestas Setkus in the second half, before he further scored two more from Bernardo Silva passes, before William Carvalho's injury-time fifth.