Home News/Gist Serena Williams: The thin line between a retiree and a quitter by Sledge Mcee

Serena Williams: The thin line between a retiree and a quitter by Sledge Mcee 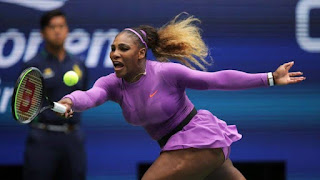 Serena Williams should bow out now that the ovation is still loud, it won't change the fact that she is a legend of the game of tennis, and arguably the G.O.A.T.


23 Grand Slams is no mean feat, only GOATs do that. She should stop destroying her legacy with her desperation to equal and possibly break Margaret Court's 24 Grand Slams all time record.
She has lost her last four grand slams finals, with 20-year-old Naomi Osaka, and 19-year-old Bianca Andreescu defeating her in two of those finals. She ought to take note of the Freytag Pyramid of her career, that it is no longer at the climax but falling action, due to age and childbearing. Perhaps, she is waiting for that moment when 15-year-old Cori "Coco" Gauff would disgrace her to be convinced beyond all reasonable doubt that it's time to bow out.
Arsenal didn't win any trophy between 2005 and 2013, but the story changed when the club won three FA Cups between 2014 and 2017, instead of Arsene Wenger to use that golden moment to bow out, he defiled all call for him to quit and stayed put, only for him to be bullied by the fans to leave at the lowest point of the club. Today only few people talk about his achievements in the club; many people only talk about the bitter memories in his days at the club.
Sir Alex Ferguson on the other hand knew exactly when to bow out, today people barely talk about his failures in the club, they only concentrate on his achievements.
Serena don't be like Wenger, be like Ferguson rather. Leaving the stage now is not quitting but retirement.