Home Interviews News/Gist Watch: Wendy Williams to marry again, but she needs a Man with his own Money

Watch: Wendy Williams to marry again, but she needs a Man with his own Money 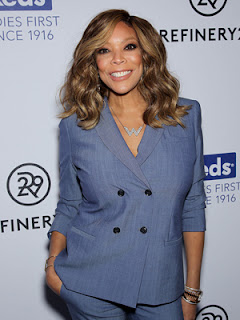 Wendy Williams says she will marry again one day, but that it will be on her terms. She wants a man with his own money and career, as well his own place so they don’t have to live together.


Kevin Hunter Sr.’s infidelity hasn’t turned off Wendy Williams to the idea of marriage. While she’s divorcing her husband of nearly 22 year for fathering a child with his alleged mistress, she is looking for a man who has his life in order and wants nothing but the 55-year-old’s love and respect.

“I say this all the time, and my mom applauded me for it — I’m a wife. I’m not a girlfriend and I will get married again,” Wendy tells Dr. Mehmet Oz on his daytime talk show on Sept. 11.
In a preview clip she’s got prospects as she’s dating “many men,” but she won’t have a traditional marriage where she’d live with her husband as she likes her newfound freedom.

She’s definitely not going to repeat the same situation she had with Kevin where their professional lives were so intertwined. He was her manager and an executive producer of The Wendy Williams Show so it made cutting ties with him more difficult. Next time around she wants a man who has a professional life completely apart from hers. “I need a man with a full career and his own money and his own situation. I don’t want anything from you, except your love and respect.” And, “Don’t ask anything of me, but love and respect,” writes Hollywoodlife.
Wendy’s daytime talk show returns on Sept. 16 and she’s been making the rounds on other daytime talk shows, opening up about her husband’s cheating scandal. During a Sept. 5 appearance on The View, she explained, “Infidelity is one thing; a full baby is a whole other topic. A baby! I’m not changing pampers, I want to be pampered,”
“From my mother, I’ve learned how to make lemons into lemonade in life. What am I supposed to do? Sit in the house and cry?” She then joked about how she’ll be back on TV while her 46-year-old ex will be taking care of an infant. “That’s why I’m going into season 11 and he’s changing pampers,” she quipped.
Watch here- https://youtu.be/peNvJkg-Hxg