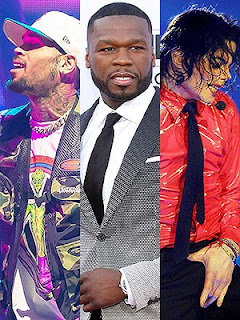 50 Cent is now doubling down on his claim that Chris Brown is the superior R&B performer over Michael Jackson. The rapper even went so far as to post a satirical clapback on MJ’s behalf…you can’t make this up.


Well, someone agrees with Justin Bieber. Once again, 50 Cent, 44, put it out into the universe (AKA, Instagram) that Chris Brown, 30, is “better” than the late Michael Jackson, in his not so humble opinion.

“I would hate to be a R&B ***** right now…this fool better then MJ,” 50 wrote on Oct. 3, alongside a video of Breezy busting out pirouettes on the stage. He added “no 🧢” — “no cap” is rap speak for “no lie.” To emphasize his point, 50 jumped into the comments section and wrote, “Repeat after me MJ was great but it’s CB’s turn.”

Oh, the joke didn’t end there. 50 proceeded to Photoshop his face over MJ’s on the pop star’s 1982 Thriller album, which he renamed “Curtis Jackson — Thriller”.

Just when we thought Fiddy has reached peak shade (something we think every week now), the rapper even edited a glock into MJ’s hand — yes, you read that right, a glock. His caption? “CB ain’t got s**t on me.🤨I got moves fool,” Fiddy wrote, imagining what the pop star would say in response to his claim that Breezy is the true King of Pop, writes Hollywoodlife.
50 sparked the CB vs. MJ debate on Sept. 5, when he posted a video of Chris entering a stage via back flips. “All I’m saying is I never seen MJ come out like this,” the “In Da Club” rapper captioned the clip, which didn’t bode well with MJ’s daughter, Paris Jackson, 21.
“Superbowl 1993,” the model responded, using her dad’s Super Bowl halftime show performance as evidence that MJ can “come out.” She continued, “True legends don’t need to exert outrageous amounts of energy just to grasp your attention. Stillness, my friend. Stillness. More power in stillness than you can possibly understand.” In another comment, Paris clarified that she wasn’t questioning Chris’ moves, either: “And I say this with zero shade to Chris. I love him dearly. This is just for you, 50.”

In response to Paris, 50 brought up the child sexual abuse allegations against Michael, which surfaced in the Leaving Neverland documentary in Jan. 2019. “Why am I the bad guy. I understand how you feel Paris, but does anyone care about how the little boys butts feel,” the rapper asked Paris, which didn’t sit well with her cousin, TJ Jackson, 41 (MJ’s nephew).
“I loved ‘In da Club’ and some other 50 Cent songs, but I lost a lot of respect for him. A lot of respect, for many reasons,” TJ told AllHipHop News in an interview published on Sept. 17.
He continued, “I just don’t think it was cool to attack my uncle without doing any research on the truth. Then for him to attack my younger cousin who has to deal with all this, is even more immature and more disgusting. Hopefully, he’ll mature and see more of a respectful side, but it is what it is.”