Home News/Gist Alexis Sanchez out with injury for up to three months.

Alexis Sanchez out with injury for up to three months. 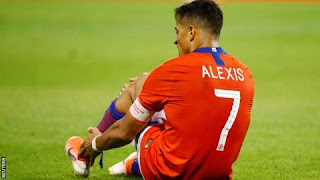 Inter Milan and Chilean forward Alexis Sanchez is facing about two or three months out on the sideline after injuring his ankle.


This occurred while on international duty in Chile's 0-0 friendly draw with Colombia in Alicante on Saturday. The Chilean Football Federation said the 30-year-old had dislocated tendons in his left ankle.
Sanchez has returned to Milan for further assessment. Remember the forward joined Antonio Conte's Inter on a season-long loan deal in August.