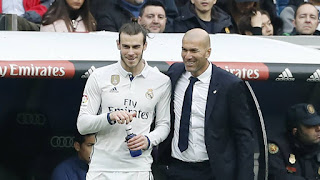 Prior to the start of the new football season in Europe, rumours were rife over the bad blood between Wales forward Gareth Bale and Real Madrid boss Zinedine Zidane.


To the extent Zidane was reportedly alleged to have asked Bale, 30, to find another club for himself.  And after he was left out of Real's 3-1 pre-season defeat by Bayern Munich, Zidane said Bale leaving the club would be best for everyone.
This led to the Welsh man purported move to Jiangsu Suning in the summer, which though collapsed as  Real wanted the Chinese club to pay a transfer fee.
Now, Zidane has come out to deny if there was a time Bale wanted leaving the Bernabau, and he might be right as since then, Bale has played seven club games since the start of the new season, scoring two goals, before he sustained the injury that has sidelined him for now.
According to Zidane: "If he can train, he trains and if he can play, he plays. In fact, he's played a lot of games - he's never talked about leaving…
"Bale is a player who puts in a lot of effort and trains well. He's important for this squad and for the club. There's a lot of talk and a lot of things said. When he's ready and 100%, we'll see. He's focused on playing well for the team."
On Monday, news has it that Bale had flown to London to meet his agent, but Zidane insisted he had been allowed to travel to England:
"He went to London on a personal matter and with the permission of the club. He talked to the club because he has a right to personal things. It's a very simple matter. He asked the club for permission and the club gave it to him. He stayed in the summer and it's better for everyone. He's here and he's happy to be here."