Home News/Gist BBNaija2109: The Tacha Drama continues as new revelations shows her Boy friend mismanaged all the money donated to her while she was in the house.

BBNaija2109: The Tacha Drama continues as new revelations shows her Boy friend mismanaged all the money donated to her while she was in the house. 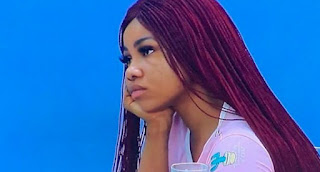 A drama involving Tacha's boyfriend, Ladi, her boyfriend's brother, Sampson and Didi said to be the person handling her social media accounts is playing out on social media, and it is all centered on the money sent in by fans of the reality show star and other celebrities.


Sharing a voice note she got from a concerned fan who seems to be leader of a group, Tacha's management were accused of lying about the money they received and making no impact in the life of the disqualified Big Brother Naija housemate who the money was meant for, according to LIB.

Jaruma also told them to account for every money sent in from different groups, people and celebrities. According to the sex therapist, this will ensure transparency.
She wrote:
“#AUDIO...I have heard all ur cries
On my part, this is what I know...... Sampson should come out & tell the world how much everyone sent with dates! LET EVERYTHING BE TRANSPARENT
Sampson told me that Peter sent them only 100k in August, He said Bobrisky did not send a penny! (Now I’m hearing something different in the voice note above??)
He said Nkechi B S sent them only 20k in August, he said RealAngela O did not send a penny & no one else has sent any money to them.”

With actress Uche Elendu and Nkechi Blessing equally sharing their experience in the entire. See the full drama below… 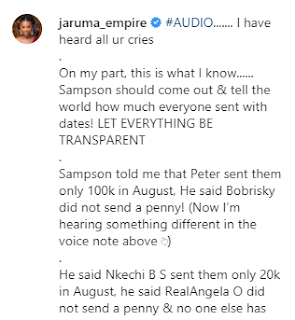 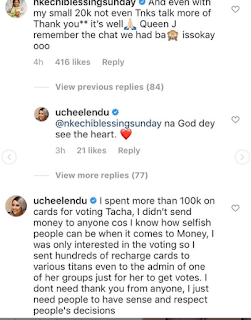