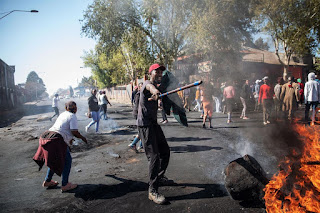 Nigerians living in Mpumalanga province of South Africa have been subjected to another attack by South Africans in renewed xenophobic violence.


Information on the attack is still sketchy at the time of filing this report according to LIB, but it was gathered that the leadership of Nigerian Citizens in South Africa (NICASA) and Nigeria’s Consular General to South Africa are already on their way to Witbank in Mpumalanga province to get firsthand information on the xenophobic attack.
The fresh wave of xenophobic violence came less than a month after President Buhari visited the country, calling for protection of Nigerians and other foreign nationals living in the country.