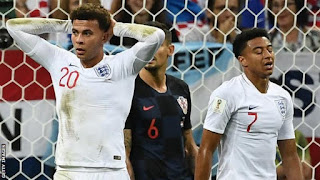 Midfielders Dele Alli and Jesse Lingard have been left out of England manager Gareth Southgate's squad for the Euro 2020 qualifiers away to the Czech Republic and Bulgaria.


There is a first call-up for defender Fikayo Tomori, while his Chelsea team-mate, striker Tammy Abraham, has also been picked.
Manchester City right-back Kyle Walker has again been omitted. England play the Czechs on 11 October and Bulgaria on 14 October, writes BBC football.

"There have been some difficult decisions to make," said Southgate. "It's an exciting squad, with players very much in form.
"There's still an emphasis on the development of younger players but surrounded by good experience."

'They will recognise why I've made these decisions'
Addressing his decision to leave out Oxlade-Chamberlain, Alli and Lingard, Southgate said: "Alex has only had a couple of games. It's a bit like Dele - their seasons haven't really got going.
"I think Jesse has had a difficult time too. As an attacking midfielder, you are going to be judged on your goals and assists. The competition is a lot higher than it was 18 months ago. Jesse is another player who can get himself back in the squad.
"All of those players will recognise why I've made these decisions.”