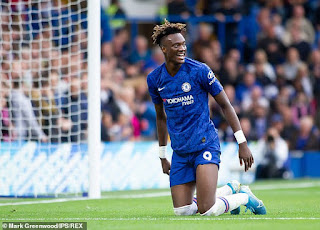 Tammy Abraham set to dump Nigeria for England as he gets call up to the England National Team.


The Chelsea striker has netted eight goals in 10 games in all competitions for Chelsea so far this season and is joint second in the Premier League's top-scorers' chart.
Though the 22 had said he had "not made a decision yet" on his international future as he is also eligible to play for Nigeria, having only played for England in two friendlies and not a competitive game.
If he plays against either the Czechs or Bulgaria, he will not be able to switch allegiance, while the same also applies to Tomori who played for Canada at Under-20 level.
"It's not ethically right to give someone a cap just so they can't play for someone else," said England’s coach, Southgate.
"He and Fikayo Tomori are both in on merit and have been part of our junior system right the way through, so we see them as English players and they have a huge desire to play for England at senior level."
"It was a fairly easy decision [to pick him] as he's the leading English goalscorer in the league," said Southgate.
Abraham played for England in friendly draws with Germany and Brazil in 2017, and was part of the England Under-21 squad at the European Championship this summer.
"We put him into the squad very young, when we were changing the complexion of what we were doing," added Southgate.
"That was a bit early for him but because of the opportunity given to him by Frank Lampard at Chelsea, we've brought him back in…This is now a great chance for Tammy."