Home music News/Gist How Travis Scott feels over a Potential romance between his immediate ex, Kylie Jenner and Drake.

How Travis Scott feels over a Potential romance between his immediate ex, Kylie Jenner and Drake. 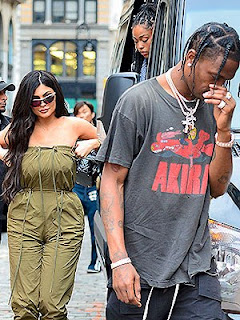 
Travis Scott, 28, has some feelings when it comes to a potential relationship between his ex Kylie Jenner, 22, and friend Drake, 33. “He would feel a bit betrayed if Drake started anything with Kylie that was anything romantic,” a source spills to Hollywoodlife.
The potential drama started on Oct. 23 when Kylie attended Drake’s 33rd birthday party in Los Angeles. Though Drake has known the KarJenner clan for years, sources at the party say the connection certainly looked flirty. The sighting comes only weeks after Kylie ended things with Travis, whom she shares 1-year-old Stormi Webster with.
“Travis considers Drake a good friend. He loves collaborating and performing with Drake,” the source adds, noting that the pair have joined forces on several tracks including “Sicko Mode” off Travis’ Astroworld album.
“He trusts that it was just a fun night out and nothing more happened and people are just overshooting their expectations on this potential relationship.” Kylie and Travis both attended Drake’s New Years Eve party at Delilah in December 2018, and Drake even snapped a photo with Kylie at Kris Jenner‘s legendary Christmas party in 2015.
Though Travis and Kylie didn’t confirm why, exactly, they parted ways, reports say that the pair were living different lifestyles: Travis has been on the road in support of his last album, meanwhile, Kylie has been in LA running her cosmetics business and raising Stormi. At the time, sources said that Kylie was hoping Travis would prioritize family life more — but his exploding career has made that difficult.
“Travis would still love to figure out getting back with Kylie, so hearing that a friend might be coming on his turf so to speak is a little jarring for Travis to handle,” the source continues. “He’s hoping and assuming everything was innocent and he is not joining in on the speculation that they are anything more than just friends.”