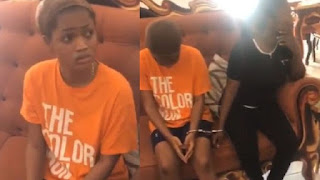 The two ladies identified as Susan and Helen, who claimed Davido had impregnated one of them have been arrested and handcuffed.


A video circulating on social media platforms shows the ladies handcuffed while being interrogated. This comes as Davido had vowed to punish the two ladies for taking their joke too far with his name and image at stake, so it seems the music star is living up to his promise.

Their arrest video clip was shared by Davido’s hype man, Special Spesh on his Instagram page with the caption: “Caught the JOKERS!!!! 😂😂😂😂😈🚨 #RISKY internet bullies!!! 😈🦍😂 defamation of character!!! Etc!!!” 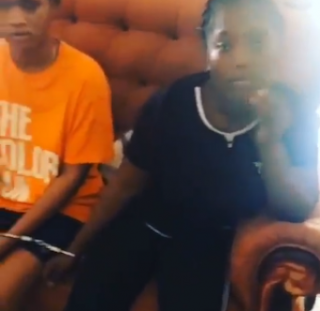 In reaction to the viral video of their arrest, the police spokesperson, Bala Elkana said:

“Even if someone defamed your character, you are to hand over the person to the police immediately but to parade them is wrong. The person being paraded has the right to sue.
Private citizens have no right to parade another person.

Not all policemen even have the power to parade suspects. You cannot be a judge in your own case. If he feels aggrieved, he should lodge a complaint and not go to effect an arrest. He cannot conclude the guilt of another person. There must be an investigation and only a court can pronounce them guilty.”