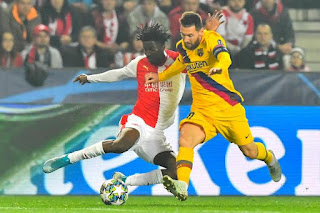 Barcelona Argentine forward, Lionel Messi became the first player to score in 15 consecutive Champions League seasons as Barcelona narrowly escaped a win at Slavia Prague, last night.
Messi gave the Catalans an early lead after an exchange of passes with Arthur, before his free-kick found Luis Suarez at the back post leading his cross shot hit off Peter Olayinka’s body and went into the net.

Though Messi has scored in 15 seasons in a row, the Argentine is still one short of Manchester United and Wales legend Ryan Giggs' record of scoring in 16 different Champions League seasons.