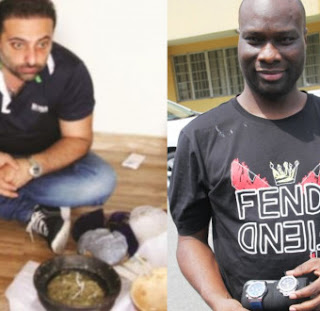 The Economic and Financial Crimes Commission (EFCC) has arrested a Lebanese identified as Hamza Koudeih and two others suspected who work Mompha to commit internet frauds.


The three accomplices of the individual were nabbed by officials of the anti-graft agency in Lagos. Hamza Koudeih was arrested over the weekend in his luxury home situated at the Eko Atlantic Pearl Tower, Victoria Island, Lagos.

The Nation reported noted that Koudeih’s arrest was made possible following intelligence that was discovered after Mompha’s arrest. All four of them have reportedly laundered the sum of N33 billion through three firms. Koudeih and his wife had refused to open the door to their apartment, several hours after the EFCC operatives arrived at the premises.

A plea from the chief security officer did not also yield any result in getting the couple to respond to several calls and beckons to open the door, the report disclosed.
After more than two hours of battling with the reinforced door of the apartment, the operatives gained entry and met the Lebanese’s wife who claimed that he had escaped through the window, despite the fact they that occupied the 33rd floor of the skyscraper.

EFCC Lagos Zonal Head Momammed Rabo, confirmed the arrest of the suspects:
“Our officials knew that he was still inside and they were even hoping to persuade him not to jump out through the window because it would be suicide…

Actionable intelligence received from local and international law enforcement agencies had revealed that Koudeih and Mompha alongside their collaborators are high valued targets in Organised Cyber Syndicate Network (OCSN).