Revealed: Federal Government of Nigeria allocates N9b to maintain and buy new generators in the 2020 budget. 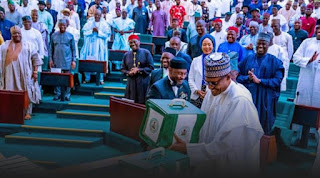 The Federal Government in its 2020 budget proposal plans to spend a sum of N9.05bn to purchase, fuel and maintain generators across ministries, departments and agencies in the country.


In the budget proposal submitted to the National Assembly by President Muhammadu Buhari on Tuesday, October 8, 2019, the government also allotted N75.4m for maintenance and fuelling of generators in some of its missions abroad, as analyzed by PulseNg.

Punch reports that the sum to spend on generator might be much more as some agencies like the Independent National Electoral Commission (INEC) and the National Health Insurance Scheme (NHIS), which have offices across the country failed to provide a breakdown of their budget.

The Nigerian Army has the largest single budget for generators with N518.3m for fuelling alone excluding maintenance.
The Economic and Financial Crimes Commission (EFCC) takes the second position with N313.4m for maintenance and fuelling their generators.

Breaking it down, the agency asks for N64.5m for maintenance, N166.6m for fuelling of the generators and N82.2m to purchase a new generator.
According to Punch, EFCC’s budget for generator is ten times higher than that of its sister agency, Independent Corrupt Practices and Other Related Offences Commission (ICPC). The agency budgeted a sum of N34.2m for fuelling and maintenance of their generators.
In the third position is the Office of the Head of the Civil Service of the Federation which asks for a sum of N283.7m. The office earmarks N255m to fuel its generators and another N27m to maintain them.

The Nigeria Defence Academy takes the fourth position in the 2020 budget for generator as the agency asks for N273.7m for maintenance of generators (N133.5m) and fuelling of the generators (N140.1m).
The Nigeria Police Force comes sixth with N222.9m for maintenance and fuelling of its generators across its formations and commands in the 36 states and the Federal Capital Territory. While the Nigeria Police Force Academy, Wudil demands a separate N31.7m for the same purpose.
Another agency, the Nigeria Correctional Service (formerly known as the Nigeria Prisons Service) demands N214m to fuel and maintain its generators while the Nigeria Immigration Service asks for N109.1m for the same purpose and a separate N95m to buy a new generator.

The Federal Ministry of Health and the 88 federal teaching hospitals, medical centres and agencies has the highest budget for generators, the ministry seeks N1.5bn from the 2020 budget.
Breaking it down, the ministry and its agencies budgeted N173.7m for generator maintenance and N1.1bn to fuel them, while N220.8m was earmarked separately to buy new generators.

While the Federal Medical Centre, Kebbi State seeks to get N32m for the procurement of two 500KVA generators and other items, the Institute of Public Analysts of Nigeria pencilled N3.5m to buy a generator for its laboratory; and Federal Teaching Hospital, Gombe demanded N50m for “generators and inverters.”

As for the Ministry of Education and the 197 federal secondary and tertiary institutions, departments and agencies, N1.27bn would be needed to buy, fuel and maintain their generators.
According to Punch, the N9b earmarked for generators by the Federal Government is more than the Internally Generated Revenue of Bauchi, Abia, Zamfara, Kogi, Anambra, Bayelsa, Jigawa, Ebonyi, Ekiti, Adamawa, Nasarawa, Katsina, Kebbi, Borno, Taraba, Yobe and Gombe states in the first and second quarters of 2019.