Home News/Gist The sad murder story of Lumumba: One of the most famous political martyrs of modern times.

The sad murder story of Lumumba: One of the most famous political martyrs of modern times. 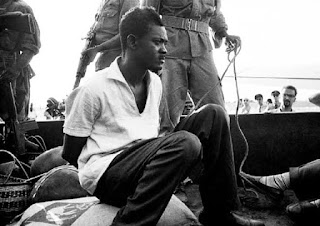 When they arrived, their graves had already been dug. The prisoners were barefoot and dressed only in their trousers and vests. As he was led to the graves, Lumumba spoke to Verscheure: ‘You’re going to kill us, aren’t you?’ he asked. ‘Yes,’ replied Verscheure.


Lumumba was the last to die, shot by a firing squad under the command of a Belgian officer.
During the night the Belgians, increasingly worried about the implications of their involvement in Lumumba’s murder, began to concoct a cover story about how Lumumba and his companions had been killed by ‘patriotic’ villagers after escaping from detention.

They also decided to get rid of the bodies. The following night two Belgians and their African assistants dug up the corpses, transported them to Kasenga, 120 miles north-east of Elisabethville, hacked them into pieces and threw the pieces into a barrel of sulphuric acid. Then they ground up the skulls and scattered the bones and teeth during the return journey, so that no trace of Lumumba and his companions would ever be found.

The murder of Lumumba turned him into one of the most famous political martyrs of modern times. It sent shockwaves through much of the Congo and led to worldwide protest. The Belgian embassy in Cairo was sacked and there were demonstrations in more than thirty cities including Washington, New York and London.

To many protesters he was a heroic figure struggling to free his country from the iron grip of imperialism, the victim of a neo-colonial conspiracy, cut down by Western powers because he challenged their hegemony, written by Martin Meredith for ‘The State of Africa’.