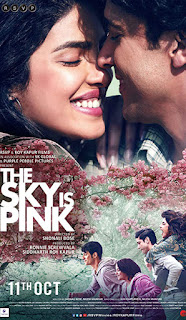 The Sky Is Pink is a 2019 Indian Hindi-language biographical film. The film sees Chopra's return after a three-year break from Bollywood.


It is also being dubbed into English in certain areas of India, Uk, USA and Canada by Sammy John Heaney.
Based on the love story of a couple spanning 25 years, the story is told through the lens of their spunky teenage daughter – Aisha Chaudhary, who was diagnosed with pulmonary fibrosis.

The movie was directed by Shonali Bose.