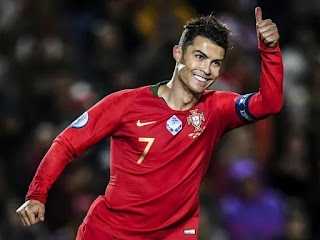 Cristiano Ronaldo has now scored 98 international goals with his scintillating hat-trick last night as Portugal thrashed Lithuania6-0, in spite being substituted in his last two games for club, with Juventus manager Maurizio Sarri saying he had a knee problem.


Equally, his three goals last night draws him closer to the record of 100 goal mark for country with the only footballer to have achieved that feat was Iran legend, Ali Daei who netted a world-record 109 for his country. The win moved Portugal to within one win of a place at Euro 2020. He first scored an early penalty before curling in a second before Bernardo Silva set him up for his third. And this is Ronaldo's ninth Portugal hat-trick.