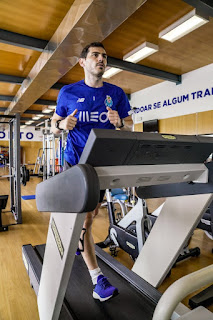 FC Porto goalkeeper Iker Casillas has taken the next step in his recovery from a heart attack in May, returning to training for the first time in six months.


The former Real Madrid star shared this image of his boots, along with the caption: "six months and three days you have been in the locker".

The 38-year-old has been keeping his fans up-to-date throughout his recovery and shared this photo of himself on a treadmill a few weeks ago. Casillas was rushed to a local hospital after he suffered a heart attack during a training session. Local outlet Maisfutebol reported he underwent a cardiac catheterisation, and Porto soon released a statement, reassuring fans he was out of danger.

He's been slowly working his way back since, he trained individually for the first time on Monday. Casillas worked for less than half an hour and is not yet close to returning to match action, but he has been included in Porto's official squad for the 2019-20 Primeira Liga season.

He's been working as a liaison between the Porto squad, coaches and boardroom on a provisional basis.
Prior to the heart attack in May, Casillas had been an automatic starter for the Dragons in the domestic league and UEFA Champions League. He joined Porto after he lost his form and his spot in the Real Madrid goal in 2015, and he returned to his best at Estadio do Dragao, Bleacher Report writes.

Casillas won the World Cup and two European Championships with Spain, as well as five La Liga titles and three Champions League titles with Real. With Porto, he won the 2017-18 domestic title.