Hailey Baldwin is unhappy how Justin Bieber accuses her often, of farting anyhow. 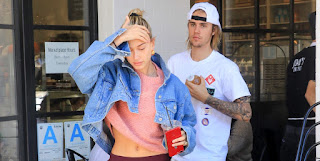 Hailey Baldwin has had enough of Justin Bieber’s fart jokes, and she made that perfectly clear by showing him how annoyed she was in a new video posted to his Instagram.


Even at 25 years old, Justin Bieber clearly still gets a kick out of making jokes about someone farting. The singer and his wife, Hailey Baldwin, were out for a drive on November  12th, when he began pestering her about letting one loose.

“Stop! You’re not funny,” she protests. “Pleaseeeeee. Stop!” Justin and Hailey are only a little over a year into their marriage, but it looks like they’re already fighting like an old married couple, reports Hollywoodlife! Of course, it was all in good fun, and we’re sure Hailey got over her annoyance once Justin stopped joking about her ‘farting.’ In fact, that same day, the lovebirds were photographed out on a lunch date together.

Justin and Hailey’s relationship has been in headlines recently thanks to the release of his ex, Selena Gomez’s, new song, “Lose You To Love Me.” The track is about the downfall of her relationship with Justin, and makes a specific reference to how fast he moved on from her with Hailey. Selena admittedly went through a dark time after the breakup, but is in a much better place now, and released the song as part of her healing process.