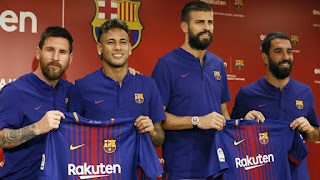 Barcelona's players offered to accept delays to their pay if it would help the club re-sign forward Neymar Jnr. in the summer, according to the latest revelation on the then transfer saga of the Brazilian.


This was revealed by club’s veteran defender, Gerard Pique when he spoke with Spanish radio station ‘Cadena Ser’.  In his words: "We were ready to adjust our contracts…We weren't going to contribute money, but we were going to make things easier by allowing some payments to be made in the second or third year instead of the first."

Barcelona did everything within their power to re-sign Neymar who left Barcelona for Paris St-Germain in 2017 for a world record fee of 222m euros (£200m).