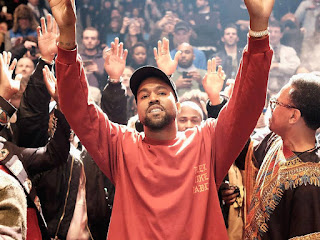 42 year old rap mogul, Kanye West is ready for the 2024 US presidential election-he plans to contest the US presidency!


Speaking with pundits at Fast Company’s Innovation Festival, he revealed he might even consider changing his name prior to his run: “When people say it’s crass to call yourself a billionaire, I say I might legally change my name to Christian Genius Billionaire Kanye West for a year until y’all understand exactly what it is,” he shared according to People. “It will be on the license plate.” While the moniker might be a bit long for campaign posters and yard signs, Kanye is ready for the run, regardless.

But he’s planning on taking his time, saying, “I’m not going to run, I’m going to walk. What they’re saying is Kanye’s crazy — one and three African Americans are in jail and all the celebrities are in jail also because they can’t say nothing because they’re so scared.” The rapper said he is also prepared to “create so many jobs” for America, should he be elected.
Kanye seems to have been on this plan for long now- remember that he had announced his plans for a presidential run at the 2015 MTV VMAs where he revealed the news during his Vanguard acceptance speech: “I don’t know what I’m gonna lose after this it don’t matter though because it ain’t about me. It’s about new ideas bro people with ideas people who believe in truth. And yes, as you probably could’ve guessed by this moment I have decided in 2020 to run for president.”