Home News/Gist Mario Balotelli becomes the latest victim of Serie A racism- see how he reacted.

Mario Balotelli becomes the latest victim of Serie A racism- see how he reacted. 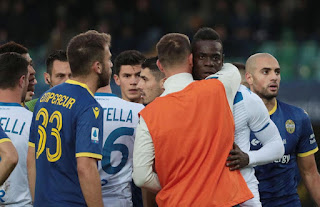 Mario Balotelli was the latest player to fall foul of racism in Serie A this season, and had to kick the ball into the crowd of fans, angrily, to signal the end of the game.
The Italian stopped the game himself in Brescia's 2-1 defeat to Hellas Verona, kicking the ball into the stands in frustration and threatening to walk off after being abused by Hellas fans.

However, he returned to the fray after the referee warned the fans and others, with normalcy returning to the game. He eventually scored a wonderful consolation goal for Brescia to silence his critics.
After the game, the Italian took to his Instagram and wrote: "The 'people' of this curva who made the monkey chants. Shame on you, shame on you, shame on you."